BUILDING PEACE AND PREVENTING VIOLENCE AGAINST WOMEN AND GIRLS IN PAPUA NEW GUINEA, ONE CONVERSATION AT A TIME 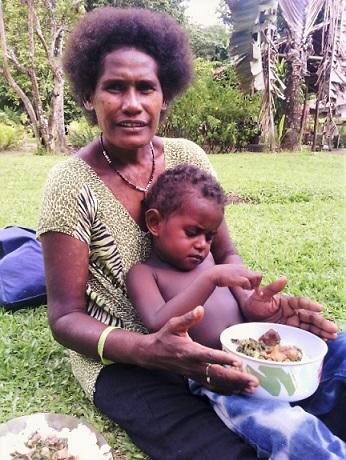 Raising four boys alone, 47 year-old Lucy Kukue was especially vulnerable to the aggressive behaviors rampant in her small village in South Bougainville, Papua New Guinea. While walking alone at night or on weekends, Lucy faced a constant threat of harassment by intoxicated men from nearby villages. She felt housebound and depressed, adding stress to her already challenging life as a single mother.

Bougainville, an island east of Papua New Guinea’s mainland, has high rates of violence—remnants of a nearly decade-long civil war. While the war has formally ended and the island has become an autonomous region that is now partially self-governed, Bougainville’s violent past and unequal gender norms condoning violence against women continue to affect its citizens. The impact is profoundly debilitating to women.

The UN Multi-Country Study on Men and Violence, conducted by the United Nations Development Programme and Partners for Prevention, a joint United Nations programme working to prevent violence against women and girls in Asia and the Pacific, found that Bougainville had one of the highest violence rates among the study sites. Of the surveyed men in Bougainville, 80 percent reported perpetrating physical and/or sexual violence against an intimate partner. The research also found high rates of reported depression, suicide, substance abuse and post-traumatic stress among respondents.

“Bougainville is challenged by the lingering effects of the long conflict, as well as the lower position women and girls hold within its communities which leads to a tolerance of violence against them,” said Dr. Jeffrey Buchanan, the UN Women Country Representative in Papua New Guinea. “Violence against women and girls is shown to have a significant negative impact on the sustainable development of communities and nations, including public health and economic development.”

Anecdotally, acceptance and incidents of violence are beginning to change, though, thanks to an intervention jointly led by the United Nations Entity for Gender Equality and the Empowerment of Women (UN Women), the Nazareth Centre for Rehabilitation in South Bougainville. Ending violence against women and girls is one of UN Women’s main focuses. The intervention, called Planim Save, Kamap Strongpela (PSKS), or in English, Plant Knowledge, Grow Strong, receives technical support from Partners for Prevention.

PSKS and its partners aim to create peace in South Bougainville by bringing 2,800 people from its communities together to prevent violence against women and address longstanding, conflict-ridden dynamics.

Through facilitated community conversations, the programme works to transform accepted norms to be in favor of gender-equitable attitudes and behaviors, helping prevent violence against women. The conversations also promote trauma healing and peace building.

Steve[1], for instance, is a young man whose father left him, his mother and siblings. Feeling abandoned, Steve turned to alcohol and used violence against his mother.

With the help of PSKS, Steve realized his behavior was unfair. He was harming his family, damaging their property, and devastating his mother, who did all she could to make ends meet and protect her family.

After participating in community conversations, Steve chose a path toward peace and took responsibility for his aggressive actions, deciding to help his mother instead of hurt her. He stopped drinking; he repaired his mother’s kitchen, which he had destroyed; and he took out a loan to open a small canteen.

Steve’s improved behavior and the additional income from his store are game-changers for the family. Steve’s mother spends more time at home with her children, as opposed to traveling to a far off market where she stayed for extended periods to sell goods and escape Steve’s violent outbursts.

Steve’s mother, who cries with relief thinking of her son’s transformation, believes the programme is changing Steve’s attitudes toward women. She hopes other women in her community will experience greater respect and compassion from men too, as a result of PSKS.

Primary prevention of violence against women and girls

Stopping existing violence, like Steve’s story, is vital to women and girls’ safety. But the focus of PSKS and Partners for Prevention is preventing violence so it doesn’t occur to begin with, known as ‘primary prevention.’

“Primary prevention addresses the underlying causes of violence and invests in opportunities to prevent the potential for violent behaviors,” explains Kathy Taylor, Manager of Partners for Prevention. “The approach works hand-in-hand with violence response efforts, which target existing violence, to ensure a robust strategy for establishing a safe future for women and girls.”

With support from PSKS, Lucy – the single mother of four – is working to move the community toward nonviolent conflict resolution practices so violence is no longer the first-line tactic. As a community counsellor trained by the PSKS team, Lucy shares anecdotes of change with hard-earned pride; she has a direct role in primary prevention of violence. Lucy resolves conflicts between partners, neighbors, friends and foes using nonviolent, gender-equitable techniques.

PSKS is building capacity among community leaders by establishing 20 community counselors like Lucy throughout villages in the South Bougainville region. The counselors provide conflict resolution services to avoid violent outcomes, and basic counseling services to women who experience violence.

“Recently a homebrew-related fight erupted among two young men, and their relatives wanted to retaliate against each other,” Lucy gives as an example. “As a mediator, I am trained to be a neutral person in an argument, hearing both sides of the story, so I can help both parties.”

Lucy sees less indulgence in homebrew – homemade alcohol – which has plagued South Bougainville communities and adds fuel to conflicts. She also reports less marital arguments, and an improved ability to appropriately navigate disagreements when they arise within marriages, families and her village.

“Even though the community conversations focus on issues around violence against women and girls, the trainings also address what happened during the civil war,” Lucy says.

The community conversations illuminate links between inequitable gender attitudes and behaviors and issues like civil war trauma, homebrew consumption, health, pervasive aggression between young people, rape, domestic violence and marital conflicts, like polygamy. These interlocking challenges must be addressed in tandem to prevent violence against women and girls in the future.

By helping participants understand these inherent connections, and by empowering community members like Lucy to pave the way as role models, PSKS intends to spark a trend of peace throughout South Bougainville so women and girls, alongside men, enjoy lives free of violence.

The efforts underway in Papua New Guinea are part of Partners for Prevention’s coordinated strategy for the primary prevention of violence against women and girls throughout five Asia-Pacific countries, including Bangladesh, Cambodia, Indonesia, Papua New Guinea and Viet Nam.

About Partners for Prevention

Partners for Prevention (P4P) is a United Nations (UN) joint programme working to prevent violence against women and girls in Asia and the Pacific at the regional level. Based on its groundbreaking research, the UN Multi-Country Study on Men and Violence in Asia and the Pacific, P4P promotes and supports violence prevention initiatives and policies. Combining the strengths of four UN agencies – UN Development Programme, UN Population Fund, UN Women and UN Volunteers – with governments, civil society, and support from the Australian government, P4P transforms social norms and practices to prevent violence before it occurs. P4P’s work supports the UN’s Sustainable Development Goal to achieve gender equality and empowerment of all women and girls by 2030.